E.P.A. Chief, Rejecting Agency’s Science, Chooses Not to Ban Insecticide | March 29, 2017 - The New York Times
There is a separate page on The Bottled Water Industry.
More extensive coverage of the Toxic Substances Control Act (TSCA) can be found on Global Digest.

"As Richard Denison, an expert at EDF on chemical policy reform, points out, the latest spill brings "the failures of TSCA into sharp focus. TSCA is our main chemical safety law--and it has not been updated since 1976. MCHM was allowed onto the market with no evidence that it is safe.

"Worse, 62,000 chemicals were grandfathered by TSCA in the 70s. We have no information--from industry--about what these chemicals are doing to us. We know next to nothing about their carcinogenic effect, their mutagenic effects, their teratogenic effects, leading to congenital malformations, their developmental toxicity.

"But scientists and researchers are discovering a great deal of disturbing evidence that some of these chemicals--things we breathe as well as ingest every day--are harmful to human health."

"Fracking, or hydraulic fracturing, is the act of drilling and injecting fluid into the ground at a high pressure so as to fracture shale rocks and release natural gases inside. Currently, there are more than 500,000 active natural gas wells across the United States. Every site needs roughly 400 tanker trucks carrying water and supplies to the area. Between 1-8 million gallons of water and 40,000 gallons of chemicals are used per fracture. Those chemicals can include up to 600 different harmful substances. A pipeline is drilled approximately 10,000 feet into the Earth, and the fluids are forced down to the shale rocks containing natural gases. The waste fluids are left behind to evaporate, although this is also a problem because the chemicals in these mixtures can leak into water sources or return as acid rain."
--- Force Change
There is a separate and more comprehensive page on 'Fracking' - Hydraulic Fracturing.

[Stories about individuals and communities collaborationg]
There is a section on the Microbiome on the Science Page.


Supporting Traditional Chinese Medicine Is Supporting Poaching Of Endangered Animals
And The Cruel And Painful Practice Of Bear-Bile 'Farming,'
which is why you won't see any links to Chinese medicine websites on this page.

In fact, all of Asia--South Korea, Japan, Thailand, Laos, Vietnam, the Phillipines--shares responsibility for the continuation of these superstitious and unethical practices, practices that offer no actual medical or health benefits at the cost of extinction for animals such as elephants and rhinos. Moreover, considerable sums of money are involved which, on the surface, points to the rich as being the main customers. Capitalism 101: If there's no demand for a product, there is no reason to supply the product. It's a global business, and Americans are not above it. In New York state, for instance, it's legal to hunt bears for their gallbladder to be sold on the Asian market.

The Asiatic Black Bear (Ursus thibetanus), already endangered and listed on Appendix I of CITES before the 1980s, may now be verging on extinction, according to the Chairman of the IUCN Bear Specialist Group (Servheen 1989). Native to most of Asia from Iran and India east to Mongolia, Russia and Vietnam, this species has been the major target of the gallbladder trade. From 1979 to 1988, up to 59,000 gallbladders were illegally exported from China to Japan (Servheen 1989). And... "The Asiatic Black Bear ranges into Siberia, where it is being slaughtered for its gallbladder in spite of being legally protected (Galster 1996). -- Detailed Discussion of Bears Used in Traditional Chinese Medicine

Save Pangolins from the Illegal Wildlife Trade! | Care2 Petitions
Pangolin scales are in high demand in traditional Chinese and Vietnamese medicine.
They are used to treat a variety of conditions from asthma to reproductive problems and cancer
- despite a total lack of evidence regarding their effectiveness.

Tiger bones have been a common ingredient in traditional Chinese medicine for centuries because of the belief that they strengthen the body. Despite the fact that they have been removed from all ingredient lists throughout the country, there is still a demand for them among the wealthy. The industry has reduced the tiger population in China from 100,000 to a mere 3,000 over the course of the last century.

It's estimated that 20,000 bears are held in horrible conditions on bear bile farms, legal in China, South Korea, and Japan.

Of all the despicable cruelties inflicted on animals by people, bear-bile farming tops the list in my book. It's legal in China, Japan, and South Korea, and in Vietnam remains widespread despite being illegal. The practice bespeaks of the cold-bloodedness and superstitious nature of the Asian peoples. They live in their own parallel universe where common sense, empathy, compassion, and respect for nature and its creatures are hardly considerations. Moreover and to the point: Bear bile is not a necessary commodity for anything. 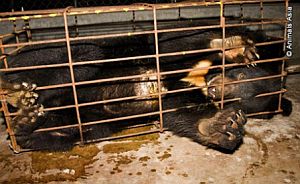 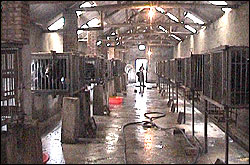 "Bear bile has been used in traditional Asian medicine for thousands of years. It contains high levels of ursodeoxycholic acid (UDCA) known to be useful for treating liver and gall bladder conditions. However, there are now many readily available herbal and synthetic alternatives with the same medicinal properties."
Animals Asia

On the Science/Biology page is a section on Ethnobotany.

"Few are aware of how much we already depend on wild organisms for medicine. In the United States a quarter of all prescriptions dispensed by pharmacies are substances extracted from plants. Another 13 percent come from microorganisms and 3 percent more from animals, for a total of over 40 percent that are organism-derived. Fewer than 3 percent of the flowering plants of the world, about 5,000 of the 220,000 species, have been examined for alkaloids, and then in limited and haphazard fashion. The anti-cancer potency of the rosy periwinkle was discovered by the merest of chance, because the species happened to be widely planted and under investigation for its reputed effectiveness as an antidiuretic.

"The scientific and folkloric record is strewn with additional examples of plants and animals valued in folk medicine but still unadressed in biomedical research."

From The Diversity of Life by Edward O. Wilson, published 1993

Senate Republicans Reveal Long-Awaited Affordable Care Act Repeal Bill | June 22, 2017 - NPR
"There are a few other ways the Senate bill mirrors the House bill.
In addition, it bans the use of any federal funds for any health care plan that covers abortion,
except in the cases of rape, incest or where the pregnancy puts the mother's life in danger."

Trump budget seeks huge cuts to science and medical research, disease prevention | May 23, 2017 - The Washington Post
Planned Parenthood would be barred from receiving any HHS funding, according to a fact sheet accompanying the budget release
— a prohibition that would apply not just to Medicaid but to all programs. The fact sheet notes that this move
“follows through on a campaign promise” to block federal dollars from
“certain entities that provide abortions, including Planned Parenthood.”

On the Biology page there is a section on The Human Brain.

Experimental Drug For Huntington's Disease Jams Malfunctioning Gene | May 9, 2019 - NPR
This is your brain, in glorious color | NBC News
A new interactive map of a fragment of a human brain gives new insights into its structure.

More resources on Neurogenesis on the Science Page