"Fracking, or hydraulic fracturing, is the act of drilling and injecting fluid into the ground at a high pressure so as to fracture shale rocks and release natural gases inside. Currently, there are more than 500,000 active natural gas wells across the United States. Every site needs roughly 400 tanker trucks carrying water and supplies to the area. Between 1-8 million gallons of water and 40,000 gallons of chemicals are used per fracture. Those chemicals can include up to 600 different harmful substances. A pipeline is drilled approximately 10,000 feet into the Earth, and the fluids are forced down to the shale rocks containing natural gases. The waste fluids are left behind to evaporate, although this is also a problem because the chemicals in these mixtures can leak into water sources or return as acid rain." - Force Change

Fracking advocates on television always skirt around the problem of wastewater pools (storage ponds), a mixture of sand, mud, and toxic, carcinogenic, and, in some cocktails, radioactive chemicals, sitting out in the open, naturally, on the grounds next to the drilling equipment. What are they going to do about that? Where do they intend to put it?

"The oil and gas industry is targeting our national forests, wildlife refuges and
other public lands as the next frontier in their reckless fracking boom.
The consequences for our public lands could be devastating.

"Tell President Obama to rein in Big Oil & Gas by imposing a fracking moratorium on all federal lands."
Help Stop The Frack Attack 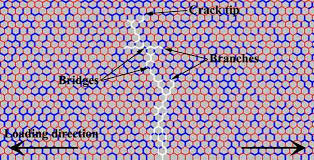 I ran across an anecdote that epitomizes the problem with crack, or fracture, propagation as spelled out in any text on fracture mechanics.

"A ship’s cook one day noticed a crack in the steel deck of his galley. His superiors assured him that it was nothing to worry about — the crack was certainly small compared with the vast bulk of the ship — but the cook began painting dates on the floor to mark the new length of the crack each time a bout of rough weather would cause it to grow longer. With each advance of the crack, additional decking material was unloaded, and the strain energy formerly contained in it released. But as the amount of energy released grows quadratically with the crack length, eventually enough was available to keep the crack growing even with no further increase in the gross load. When this happened, the ship broke into two pieces; this seems amazing but there are a more than a few such occurrences that are very well documented. As it happened, the part of the ship with the marks showing the crack’s growth was salvaged, and this has become one of the very best documented examples of slow crack growth followed by final catastrophic fracture." -- Introduction to Fracture Mechanics

Fracture mechanics is a tool of materials science. Its concern is with cracks and their propagation through various material mediums. The fractures formed in the process of hydraulic fracturing are vertical, aimed towards the surface of the earth and passing through everything in between. When the constraining pressure on the crack tip reaches a critical value, its influence is nullified and the crack is permitted to proceed. That is, external holding pressure is released which allows the crack to grow as it spreads and bifurcates. 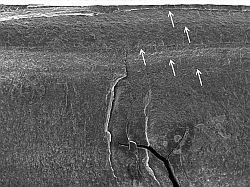 This process continues--cracks do not heal themselves, their inherent tendency is to extend--until the constraining energy is surpassed by the internal properties of the material at the crack tip where outward pressure is continually being asserted, in which case we have a runaway or catastrophic propagation of the crack.

"When a crack has grown into a solid to a certain depth, a region of material adjacent to the free surfaces is unloaded, and its strain energy released." And ... "beyond a critical crack length the system can lower its energy by letting the crack grow still longer. Up to (that critical crack length), the crack will grow only if the stress is increased. Beyond that point, crack growth is spontaneous and catastophic."-- Introduction to Fracture Mechanics

In the case of fracking, this load-pressure release is felt as mini-earthquakes, and as the crack, or fracture, proceeds and grows towards the surface, it passes through aquifers--groundwater--the fresh subsurface water we depend on throughout the country. The waste, a cocktail of toxic and carcinogenic chemicals, is dumped at the bottom of the refuse tube into the surrounding earth, free to fill any and all cracks it might find as it bubbles up through an ever increasing number of conduits.

"Structurally, a disposal well is the same as an oil or gas well. Tubes of concrete and steel extend anywhere from a few hundred feet to two miles into the earth. At the bottom, the well opens into a natural rock formation. There is no container. Waste simply seeps out, filling tiny spaces left between the grains in the rock like the gaps between stacked marbles." -- Stefan Finsterle - hydrogeologist

Conclusion: Inevitable crack propagation--perhaps a few years from now or maybe twenty years--will allow those chemicals to enter the aquifer system, thereby polluting our fresh water and causing health problems we can't even imagine. The consequences of this are beyond comprehension, and no amount of pay-outs by the gas and oil industry are going to mitigate the damages.

What are we going to do about it? Should we, as usual, wait until disaster strikes and then try to compensate? Spend time and money on Congressional hearings pointing the finger at one corporation or another? I believe the lure of money at this time is far too strong to block the fracking frenzy. Small victories, local shutdowns in the face of blatant widespread damage to the environment, both above ground and below, causing health problems for humans and wildlife will occur over the next few years, but the larger picture of cheap natural gas and the money made extracting it will prevail. Politicians are in on it, as usual; the oil industry is a big contributor.

The process of fracking alone, understood and imagined, is a violent rape of the Earth and can only end tragically. Many millions of years ago Nature separated out layers of shale rock and sediment containing tar and gas from the self-sustaining and life-giving shed of water at the surface; it seemed like a good idea at the time. We are now initiating the destruction of that natural boundary through fracking. No good can come of this in the long term.

Aquifer -- An underground layer of permeable rock, sediment (usually sand or gravel), or soil that yields water. The pore spaces in aquifers are filled with water and are interconnected, so that water flows through them. Sandstones, unconsolidated gravels, and porous limestones make the best aquifers. They can range from a few square kilometers to thousands of square kilometers in size.