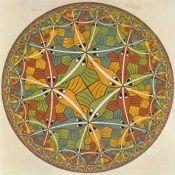 Three teams of astronomers poured over sections of a picture of the deepest view into the universe ever seen, taken by the Hubble Space Telescope of a square over what amounted to eleven days of exposure on a single location -- no bigger than a thumb, actually -- far off in the distance. Six scientists to a team, half sitting, the rest standing or pacing in front of a long pop-up table, covered with papers, spectrographic analyses, small pictures, pencils, rulers, hand-held calculators, styrofoam coffee cups, bottled water, and one ashtray. Jackets draped over backs of chairs, each team's excitement and astonishment was palpable in the close-knit setting. Above the table were two rows -- one stacked on the other -- of three 27-inch monitors showing different regions of the overall exposure at varying magnifications.

I only just arrived, my plane had an engine go out coming into Baltimore. After convivialities with the administrative team, some small talk, dinner invitations, I was assigned to Doctor Zeingelder's work-group in theatre C. I had never worked with him before but was looking forward to the meeting. He greeted me as a colleague, warm and personable, enjoying himself too much to be concerned about unintended tardiness - Nobel Laureates can be testy at times.

Introductions to the rest of the team were postponed; the atmosphere verged on a shark frenzy. I took my post at the back, slowly walking the length of the monitors, taking it all in. When I found a particular orientation, a certain angle of perspective, I'd stopped, focused without strain, and then let it happen.

There are a small but undisclosable number of us in the world capable of, some say gifted with, the ability I possess - and that's the reason I'm here. Besides my training in astronomy and astrophysics, relativity theory and quantum mechanics, I was born with the ability to see into pictures, magnify them in stages, to layers that aren't in the pixels or silver nitrate itself. I can revitalize and bring out what only resonates in the picture by mentally visualizing content based on tachyon residue unobservable by any known technology. The configurations remain undisturbed through changes in viewing medium; how, I'm not sure.

As John Robertson, of the Large Infrared Array in Topeka, paced by in deep thought, I matched his walk to ask about what he'd discovered thus far. Agitatedly he spoke of objects which did not fit any known model, things he had never seen before or even suspected existed. With that, he left me at the coffee urn, going for my third. Coming back to the area I was patrolling, mulling over what John had said, brushing my right hand through my hair, I suddenly looked up, straight at the center monitor on the top row.

I lowered my styrofoam cup, placing it carefully on a side-table nearby. A tiny, bright red dot smack dab in the middle of tens of thousands of galaxies caught my eye. Standing straight yet relaxed at shoulders and thighs, eyes wide, I let it happen. My vision raced past walls of galaxies, then voids of hopeless emptiness, then more galaxies, clustered and combining in a strange dance. Then all was blackness save one red dot. None of the others in the room disturbed me, that was the standing order; it didn't matter, I had lost all sense of their presence.

It was farther away than at first it appeared, even to me. I finally caught up with it when time seemed to stop; I could no longer feel my body. It was near a membranous apparition of sorts, like that of a bubble made from soap, it had that iridescence. Amazingly, beyond this horizon I began to see faint glimmers of light, pin-point at first but growing in extent as I continued focusing in, increasing magnification as I went, the tachyon stream gaining in strength and definition.

I again brought my attention to the red dot, so intriguing and somehow familar feeling. I closed in with a sense of purpose I had not known before, I was near my limit, and the tachyon field glowed red with its own purpose, stretching my ability. There was an unmistakeable sense of going through a threshold, a tingling sensation in my mind, then, before me, clusters of galaxies arranged in clumps and groupings of varying numbers, a couple of dozen perhaps, appearing where the dot had been. My will was no longer my will; I was drawn towards two large spirals near the center, and then - I chose one, or it chose me.

Continuing in this leaf-on-the-stream mode I allowed my vision to zero in on one section of the arm second from the outside, to an average-sized sun. Around this sun I could see planets, several of them, in fact. Very large ones with many moons and rings of debris, and, further in towards the sun, smaller ones of noticeably different constitution. Suddenly, finally, incredulously, one image crystalized in my mind - Earth!

It was Earth. I looked deeper, it seemed easier now, almost sensual, like falling down a long, warm, soft chimney. I could clearly see North America, Baltimore, further, further, this room - days before when the picture was still being taken - people, technicians, graduate students, setting up tables and computers and the very monitor with which I was engrossed.

I couldn't backtrack, it was too much, so I broke the cord by looking away, always a painful jolt to the head and stomach and this time it was extraordinary. I needed to get outside, into the fresh air, to look up at the familiar stars. The others surrounded me, they had been watching me for some time, slightly worrying but definitely concerned. Was I all right, Doctor Robertson asked. I could just stare at them, no words would come. I waved them in a friendly way, as friendly as I could, then pointed to the side door which led to the garden area. Doctor Zeingelder escorted me, opened the door and let me out.

Early spring, the air was fresh and chill; it felt alive on my face. The stars, the Big Dipper, Orion's Belt, The Pleiades, all still there, where they've always been. What of time, I thought; what do we really know about the nature of time? How many different kinds of time are there, or do they all slide together somehow, fluidly, without beginning or end? What of space's temporal spectrum and time's spacial, is only one configuration allowed or are there many possibles we have yet to dream of, not having any use for them in our theories? The garden bench was hard and cold and sure, I sat staring up at the bright, clear night sky and thought these thoughts, feeling pleasantly insignificant - and a little in shock.

A pair of soft lips brushed my cheek, the smell of coffee and bacon tempted my nostrils and mouth, my eyes opened a micron at a time, the sun shone timidly through the lace-draped windows. I rolled to my left, next to the bed she stood, my lover of many years, wearing black silk pajamas embroidered with tiny red roses sprinkled throughout. Would I like breakfast or, smiling mischievously, something else first, she asked. Groggy and spell-bound, my tongue stumbled over itself with the effort to speak; laughing, she left me for the kitchen.

The bed was slightly damp from sweat; my shoulders and arms tingled strangely but not painfully. I sat up, paused, then put my legs over the side of the bed and stared out the window passed the tree on the lawn to the street and my old brown car. Monday morning, another day of moving and feeling, acting and being, on a planet at the far edge of the universe.