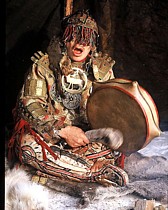 Wielding the heavy black rock found protruding from the wall of their cave, its narrow edge chipped to utter silence, Gorg easily rended the belly of the long-toothed beast. Blood and viscera spilled onto the gravel-strewn outcrop; carried aloft by the gentle breeze, the smell filled the air. After returning the rock to its leather pouch, he proceeded to tear back the hide with his strong bare hands.

As on an unspoken signal, Noz moved in; using his stone knife effortlessly and without pause, he deftly cut broad swaths of meat from the beast's chest and sides. They worked quickly and quietly without the need to think or converse; years of hunting together had honed their skills and choreographed their partnership. Soon the cats and mountain wolves would come, and their home-cave was over a day's walk through mostly unknown country.

While packing the meat into skins made from a brother of the beast, they heard a faint cry to gather coming from the trees far to the west. Frozen momentarily, they eyed one another, then hastened their pace, adrenaline oiling their muscles. As they loaded the packs of meat onto their backs -- stout leather cords wrapped over shoulders and under arms, spears in right hands -- they moved off to the east. The sound of high-pitched keening could be heard now much closer.

Need had driven the two hunters further afield than they'd wanted to go to find quarry. Now, they were the quarry.

As they neared the foothills, the calls of the predators seemed to come from ahead. They stopped to consider, communicating with their peculiar mix of sign language and grunts. Why did their pursuers not stop at the fallen beast, they wondered, most of it was still there? Could they be hearing things out of fear, or were they actually surrounded? Gorg and Noz decided that the creature sounds were coming from their mountain, their home, a place of mystery for which no questions were necessary or had ever been asked. But before the broad expanse of tall golden reeds could be reached, darkness would be upon them. They didn't have the heart to risk it.

A stand of giant wanaba trees ranged the slope a short trot to the south; they knew not what dwelt therein, but sometimes the unknown is the lesser of two evils. This was one of those times. Just beyond the first row of trees light faded quickly, but other senses held them in good stead. One massive tree had a peculiar darkness at its middle, near the ground. With spears at the ready, they examined the curiosity to discover a small aperture at the tree's base leading to what appeared to be a cavern within. Gorg, almost half again as large and strong as Noz, dropped his pack and stepped through decisively, motioning Noz to remain. Lightly touching the inner skin of the great tree with the fingertips of his left hand, not daring to breathe, keeping both spear and head focused towards the center blackness, he stealthily circled the unknown hollow. Crouching outside in the night, sweat lubricating all but the palms of his hands, Noz, poised like a bird of prey, feeling the unnatural silence, hovered ever so lightly between sound and emptiness.

After a time, Gorg scraped his spear across the dirt within. Dragging the other pack, Noz entered, easily finding his friend in the dark. Almost casually, Noz let his burden of fresh, blood-soaked meat fall next to Gorg's at their feet; no sense trying to hide anything; no secrets now. Besides, they were just meat themselves at this point, and they knew it.

What followed was an elaborate yet brief discussion as to strategy: They hoped to guard the small opening to their sanctuary until daylight, when at least they'd have a chance. If necessary, they'd throw the meat out, maybe it would satisfy the creatures, maybe. But that desperate act was a last resort almost worth dying for; their people had not been doing well hunting of late.

Noz removed from his neck-pouch the talisman he had carved from a tooth of one of the larger beasts they were fond of hunting; it was his charge. Sitting cross-legged near the center of their fortress in the bowels of the wanaba tree, he placed the tooth-figure on the ground before him, sliding it gently back and forth in the dirt until it found rest. Then, in a low, dark, somber tone, he sang, letting himself feel the earth under him, the strength of the tree about him, and the spirit of their mountain, the spirit that ran through him and his friend, Gorg. 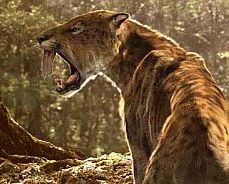 Suddenly, close-by, they heard footfalls, many footfalls. In one motion Noz stood, spear in hand, leaving the figurine where it lay. Feral with caution he approached where Gorg was kneeling -- a silhouette of stone against the portal. Without the need to sign or grunt they knew that to let a single one of the creatures inside was death. The air was pungent with the smell of cat saliva; they were very hungry. Noz thought they may also be angry; his people had taken many long-tooths for food. But this was no time for sympathy. Snarling broke his reverie. The two hunters could sense the shadows moving in the liquid dark a few spear-lengths outside the small hole, a hole that now seemed much larger than when they came in.

"Frank, Frank, wake-up, man; time to get to the airport. Johnson and Murray 'll be waitin.' This is the big one, man, the big Kahuna. You worked hard on this deal, Frank; now we need to nail the hide to the boardroom wall. So c'mon, let's hit it." With that the bossman left Frank's office for the elevator.

Frank, blurry-headed, sat up at his desk, wondering, feeling pulled apart in time and space. Against the dark mahogony of the desktop, he could feel the tension in his arms. Sweat oozed down his neck, the hairs standing on end; his back and shirt, damp. For a quantum length of time, as though through a wormhole, he flitted back, then forth; being there, then here. His jacket was draped across the back of his chair; his tie hung loosely around his neck.

The fish tank bubbling soothingly against the nether wall drew his attention; above that was a painting of the Serengeti Plain, wildebeast running from lions in a neverending grassland, a few trees off to one side. On the desk, he studied the pictures of his wife and two children; next to that a framed document, his award for marketing achievement; and his heavy leather briefcase zipped and locked lying on its side.

Frank stood, wavered a bit, then steadied himself by placing his fingertips lightly on the surface of the cool, smooth wood. After a deep breath, he reached around to grab his jacket. Mechanically, in one motion, he put it on, leaning forward as he did so. Lifting his briefcase and shifting it from left hand to right as he moved, he stepped out towards the portal. Just there, a shock of awareness and memory froze his stride abruptly, the floor seemed to fall away. Overwhelmed by shifting emotions, focused on the shimmering blackness that enwrapped him, he whispered softly, "Noz, Noz, stay back."

After a long moment listening to the shearing sound of time streaming away, Frank resumed breathing. A rush of loss and sadness, twined with a wild pride, raced through his chest and bones and soul. Bowing his head slightly, bemused and yet certain, he closed the door behind as he walked methodically towards the elevator.