The Quantum Theory of Self 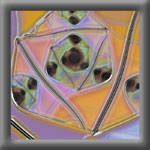 The boundary, or surface, of any figure of any dimension represents the limit of what may otherwise be considered unlimited [The two end-points of a one-dimensional line segment are its boundary, for instance.]. This limit acts to give definition to the unconditioned.

For example, the infinite 2-dimensional plane can have embedded in it a closed path of any imaginable design: a circle, a square, a pentagon, plus completely irregular shapes. When done, unlimited factored by limit [unlimited/limit] takes on a unique identity, in time and space.

A 3-dimensional solid ball or sphere is contained by its 2-dimensional curved surface or boundary. If we think of this ball as a collection of free-floating atoms or molecules, its surface, necessarily, is composed of these interior elements; nonetheless, it has an identity all its own by virtue of its special role as limiter, separating the inside from the out.

Increasing the dimension of the interior to the fourth, we can talk about, although not properly imagine, a 3-dimensional surface, a surface of a hypersphere of four dimensions. In this context, instead of free-floating molecules, we consider the homology group of all living things. We can define the individuality of these separate 3-D living objects by their boundaries, that which stands out from, or emerges from, the group of all possible cycles or waves of matter, their state of superposition. These cycles, or closed chains of vertices, give expression to the fourth dimension, wherein the elements of the class of all living things are essentially connected and undifferentiated.

A simplicial complex (to be defined later) may be thought of as the rational reflection of differentiated images perceived by the brain as it attempts to sort out its surroundings. This complex 'rests' on the surface of reality, mapping it, and this surface, or boundary, although of the underlying spacetime itself, nonetheless has a reality all its own, separating, as it does, interior from exterior.

Similarly, the boundary of all living things emerges transcendent and is itself, by nature, unbounded [as the 2-D surface of a 3-D ball is unbounded, being a boundary in its own right], part interior, without which it would have no being or manifestation, and part exterior, without which it would have no meaning or identity. It would thus seem to be a mixture, an alloy, a blending of immanence and transcendence and of being and non-being. A three-dimensional membrane of consciousness [the physical realm considered as the "densest medium"] 'enwrapping' a four-dimensional unconscious reality.

As grain in wood, the human being reflects or expresses this idea. We represent the same idealized pattern, the same archetype, indelibly etched into our cosmic genes. Our psyche functions through the tension effected by the interplay of the conscious/unconscious dichotomy. On the one hand, content fills the agent of order as raw material upwells from within. And on the other, Mind, enclosing and interpenetrating from without, filters through the interface separating individual conscious ego from universal unconscious reality, the great sea of creativity. By so doing, we consciousize the Unconscious as we identify with it.

The psyche comes from Deep Time, from the beginning--perhaps it originated with the Big Bang. It is an eidetic accumulator of impressions, stamped with the inner structure of the Void itself, bringing into manifestation the warp and woof of the cosmos.

It is my personal belief that all living things possess some degree or dimension of consciousness by virtue of being alive. It is woven into the fabric of the universe itself; in fact, the universe would not exist without it, and, therefore, all living things partake of it. It is fundamentally ingrained. At present, we really don't comprehend just what consciousness is. What has been written about it, though insightful, has been purely speculative. By way of comparison, we use what we know of life on Earth as the baseline and model to presume a priori that liquid water is an absolutely necessary ingredient for life. Justification of that assumption is based solely on very limited experience. Our definitions the terms and parameters of which we accept as dogma--like the Earth as the center of the solar system once was--need to be expanded.

I believe that in fifty to a hundred years from now it will be common knowledge that all creatures--flora and fauna--are a non-differentiable synthesis of immanent consciousness--by which they are animated and interconnected [entangled] with the universe--and self-organized matter. Which begs the question: What role does consciousness play in the self-organized complexity of living things?

"The Quantum Theory of Self" draws ideas and concepts from various mathematical fields, such as: Algebraic [or Combinatorial] Topology [Group Theory applied to the topology of polyhedra]; Linear Algebra [Transformations, represented by matrices, defining orientations on Vector Spaces]; and, acting as the overall frame, Modern Algebra [the study of Groups and other algebraic structures (ultimately the study of symmetry)].

The basic paradigm has to do with the recognition of a hierarchy of essential identities as being the result of a factoring process--whether of the physical realm or of the psychic--in the act of self-identity. Each factor --progressing as a geometric series towards increasing complexity--is stamped with a unique pattern--a kernel of identity--by its immediate parent structure in the act of factoring. The parent elements are thereby grouped together [essentially a re-grouping] according to the rule stipulated by the kernel. The effect is an identity-pattern that resonates through to the surface where it interfaces and interacts with its surroundings. However, the expression of this self/kernel is ultimately limited by what is possible.

Imagine a light shining through a window covered with a symmetrically organized collection of dots. The light maps these dots to a screen through a magical intervening filter (a linear transformation) that repositions the dots and places them into certain associations called equivalence classes--elements of the factor group. [Example]

Furthermore, as each identity (our filter from above) is a sub-symmetry contained within the pattern of the parent, an inheritance of form is transferred. Each kernel--identity element of the factor group--dictates how the dots are to associate, thereby reorchestrating the overall design of the parent in its own image, and in the process, establishing new initial conditions--a new parent--for the next phase transition.

Themes include: properties of pattern, relationship, and symmetry, with respect to perception, consciousness, and individual identity.

It is composed of three essays, each of which is a separate HTML document.

"The domain of species are invariant subsets and there are partitions of these sets that define genera, families, and so on, corresponding to hierarchically related invariant subsets."
From: How The Leopard Changed Its Spots, by Brian Goodwin, page 113.