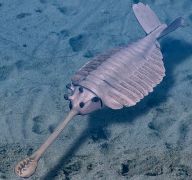 In this novel, I present a plausible explanation for the mysterious and pivotal event known as the Cambrian Explosion, understood as a local phenomenon embedded in a supremely grander and universe-encompassing revolution: The rise of animals.

There have been five major extinction events, and after each, life renewed itself, diversifying and expanding [on pre-existing phyla] to repopulate the planet. But no rebirth compares to the sudden burst of an entirely new way of living, leading up to and culminating in the Cambrian Period. Other than the emergence of life itself, this unprecedented break with the steady linear progression of evolution stands as the most significant biological event in Earth's history.

Remarkable in its rapidity, around 550 million years ago, give or take, all current animal phyla -- body plans or bauplans -- came online and diversified, fanning out to fill a panorama of modernized niches, during a geologically brief 5 to 10

million year period. Considered as vectors in ecology space and therefore things-in-themselves, these niches, permeating and filling every available nook and cranny of the new [oceanic-atmospheric systems] Earth, almost seem to have precipitated (conjured?) the bizarre creatures of the Cambrian out of pure mud.

Had the capacity for living organisms to select novel opportunities expanded exponentially by virtue of a leap of consciousness, or, had the physical and chemical properties of the Earth conspired to fine-tune just the right recipe to set the stage for broad experimentation? The establishing of prerequisite conditions and rules supporting the strategies designed by the emergent life-forms -- allowing them to adapt, transform and spread out -- had to be the consequence of geo-processes, defining and influencing, if not dictating, the life-contours of what's called the epigenetic landscape.*

But how, or by what agency, did the opportunistic flora and fauna arise? Which came first: the chicken or the egg? A cornucopia of detailed-shapes and metabolic-functions, or the environment setting the initial conditions to allow them to come into existence and sustain them in their development afterwards?

Nature abandoned its old ways and fashioned a new set of tools. Evolution abruptly shifted gear, surpassing and eliminating what had gone before. Previously non-existant orders of animals with hard parts -- a breakthrough innovation called biomineralisation -- appeared from nowhere to populate the world's oceans in a geological blink of an eye.

Life energy accelerated through the web of interconnections, pushing the system into a completely new phase.

To this date, many conjectures have been put forth as to the essential trigger for what is considered the Big Bang of Biology. But in spite of the coincidence of a confluence of several significant factors -- necessary contingencies -- none of which alone is considered responsible, there is no comprehensive consensus or conclusive explanation for this sudden eruption of multicellular life.

In all likelihood these factors are themselves effects expressing some more pervasive underlying event.

"On The Brink Of Extinction" not only addresses this enigma, but also puts in context the scope of the mystery known to us as the Cambrian Explosion.

The story takes place in Eastern Siberia, in the shadow of the Kolyma Range, and on Kamchatka Peninsula, where there are more brown bears than anyplace else in the world, plus upwards of 160 volcanoes, 29 of which are active.

"Animals are multicellular organisms that belong to the class Animalia. Animals have a fixed body plan as they develop and later in their life might undergo the process called Metamorphosis. Animals in the world are motile, meaning they are capable of independent locomotion. The fossil records show that animals are found on the earth over 542 million years ago."

* Epigenetic Landscape: "The circumstances that govern and constrain the expression of genetic information, so as to channel it into a particular developmental pathway." --- Franklin M. Harold in The Way of the Cell

For background material, read this essay by Stephen J. Gould: Gould: The Evolution of Life on Earth

Background information on possible cause of Cambrian Explosion, [PDF File], compliments of California Institute of Technology.

In the words of one evolutionary biologist: “The extreme speed of anatomical change and adaptive radiation during this brief time period requires explanations that go beyond those proposed for the evolution of species within the modern biota.” (R. L. Carroll, “Towards a new evolutionary synthesis,” Trends in Ecology and Evolution, Vol. 15(1):27-32 (2000))